MTG was formed in 1978 as a collaboration between Mooroolbark High School and the community, giving students and community members the chance to perform on stage. Founding members and the driving force behind the formation of the group were Arline and Tommy Myers.

The first show was held at Kilsyth Hall (as the Mooroolbark Community Centre was not yet built) and was a revue entitled “Carry On Mooroolbark”, which has since become the motto of the group. The cast included around 35 people, only two of whom had previous stage experience. The set consisted of a single bench.

From these humble beginnings, the group grew and strengthened, regularly producing two or three shows per year including revues, pantomimes, and one, two and three act plays.

Since 1983 MTG has accepted adult members only, and specialises in comedies which are performed twice yearly, in June and November.

Some of the plays performed throughout this long history include:

“A Tomb With a View”
“Here We Come Gathering”
“No Time for Fig Leaves”
“Man Alive”
“Play On”
“Move Over Mrs Markham”
“Boeing Boeing”
“Busybody”
“Vintage Variety”
“But Why Bump Off Barnaby?”
“Cinderella”
“Goodnight Mrs Puffin”
“Vacancy in Paradise”
“The Invisible Man”
“Rave Revue”
“See How They Run”
“Season’s Greetings”
“Holiday Snap”
“Two Over the Top”
“Bellamy”
“My Three Angels”
“Noises Off”
“The Curious Savage”
“Just the Ticket”
“It Runs in the Family”
“Post Horn Gallop”
“A Toe in the Water”
“Laugh? I Nearly Went to Miami”
“My Friend Miss Flint”
“Stepping Out”
“Family Planning”
“Lipstick Dreams”
“Nobody’s Perfect”
“Flying Feathers”
“Dinkum Assorted”
“One O’Clock from the House”
“Cash on Delivery”
“Sing On”
“It’s Now or Never”
“Off the Hook!”
“Murdered to Death”
“Pull the Other One”
“Pools Paradise”
“Kindly Keep it Covered”
“Surprise Package”
“Wild Goose Chase”
“A Foot in the Door”
“Party Piece”
“The Golden Legion of Cleaning Women”
“Fish out of Water”
“Agatha Crusty and the Village Hall Murders”
“Rumours”
“Steel Magnolias”
“Out of Order”
“The Savage Dilemma”
“Curtains Up!”
“Beyond a Joke”
“Key for Two” 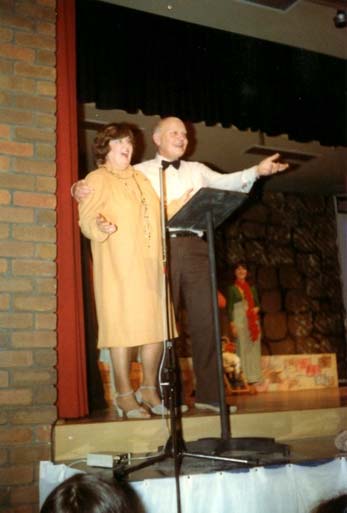